No items found.
Product is not available in this quantity.
Engagement RingsDiamondsRemodellingRings for ArthritisJewelleryConsultancy
0

No items found.
Product is not available in this quantity.
Back to all advice

The story behind one platinum engagement ring, London made.

From a client image to hand made and finished reality, here’s how we created a clean, sleek, elegant and sophisticated platinum engagement ring – where there could only be one answer to the question it accompanied...

I had my first meeting with James a couple of months ago, and over a glass of wine he explained that he and his girlfriend had discussed getting married.  She was quite happy to leave the proposal and ring to him, although in typical female fashion left some very unsubtle guidance as to what her ideal ring was going to look like!

James was fine with this, however had decided that he wanted to have his influence on the engagement ring design, after all, as he was going to be buying it, he wanted to like it as well.  He’d sent me through a snap, and when we met I brought some ring samples to show him, to get a feel for his preferences in setting the diamond, number of claws, the style of shoulders etc.

James was quite relieved for some unsubtle hinting, as it narrowed down what he needed to look for! But he didn’t want 6 claws...

Getting to the ideal design

There are so many nuances to what looks like a common engagement ring design!  Look at all the options below, the stone set shoulders have been done using different styles, and the claw shapes are different.  Two rings have what is termed ‘daylight shoulders’, meaning that the shoulders split to form a little triangle of light.  Three settings are cathedral style, and a couple are low profile.  This isn’t meant to be confusing, it is more like wine tasting, there will be a flavour that tickles your fancy.

So having narrowed down and discussed a few suggestions, James was quite keen on the fourth design.  But there was one change – a six claw was desired after all.  I sent a few thoughts through, but James forwarded another design he liked the idea of – hmmm..

Trying not to be overly technical, the featured image didn’t work well enough to be something I’d seriously consider making as an engagement ring.   I told James we needed to negotiate, and explained why:

However, this was not all bad news.  I now had a really clear idea of what James was looking for, and suggested a compromise.

As you can see from the images here, an elegant six claw setting like the one on the left is created with slightly raised shoulders, to protect the its shape.  So if we raised the setting slightly (like the right hand ring) but not quite as much as the left, we would have a stronger home for his diamond, retaining the beauty of the six claws (piece of the ring which holds the diamond is called a ‘collet’, and this particular style is called Rex because it looks like a little crown.).

It was time to get the sketch book out to show what this would look like..

So this was what we came up with.  Nothing revolutionary or ground breaking, just an illustration of how the side profile would look, so we got our strength and security, while James didn’t feel overwhelmed by the height of the shoulders.  He was happy, we were there!  There was the small detail of selecting a diamond to be managed, but actually we sorted out that detail pretty much at the beginning of the process with a little diamond beauty contest and James narrowed down five contestants to two, and then decided on the winner pretty easily. A Gvs2 with a sparkling personality.

So then it was over to the workshop to do their magic, which is always interesting!

How do you make an engagement ring?

As you can see from the gallery below, an engagement ring pretty much starts out life as a lump of metal. For a bespoke engagement ring, all the elements are made and finished by hand. So from a ‘blank’ ring setting, everything is hand fitted and carved.

Once the central stone setting (collet) has been attached, the setting for each tiny side stone is carefully drilled and carved. Then the stones can start to be added.  For an experienced setter, this is not difficult, but it does require skill and focus.

Once the side details have been taken care of, the centre stone is carefully mounted. Diamonds are the hardest substance known to man, but this does not mean that they will not cleave, crack or chip if they are not handled carefully. The culet (the pointy bit at the bottom of the stone) is particularly vulnerable.

With the centre diamond in, the ring can be polished and the claws refined. The craftsmen are a bit like anxious parents, they fuss over things until they are happy with how it looks. Which is great, because if they are pleased, I’ll be delighted and the client will be over the moon! 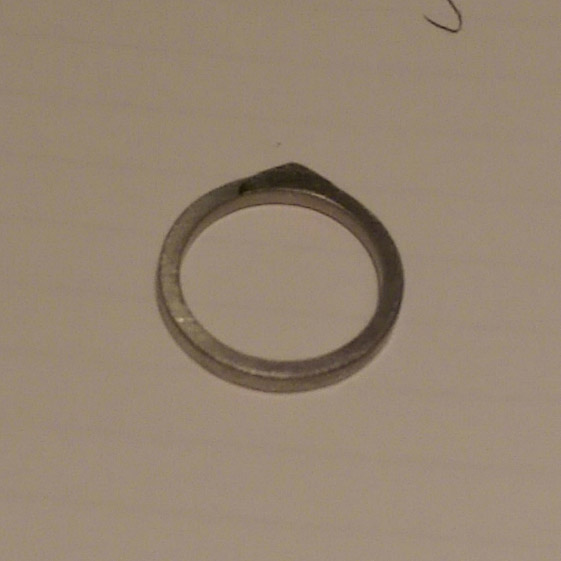 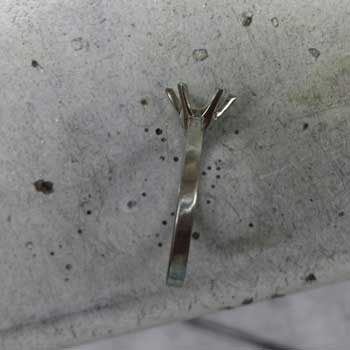 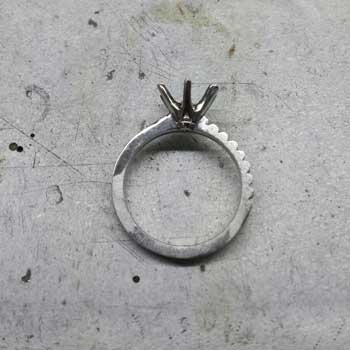 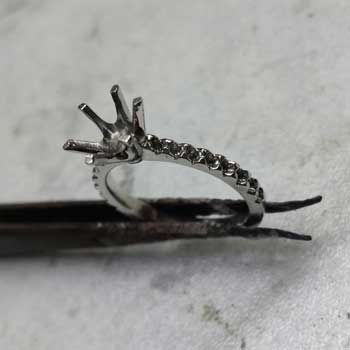 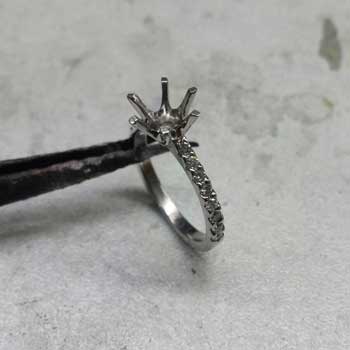 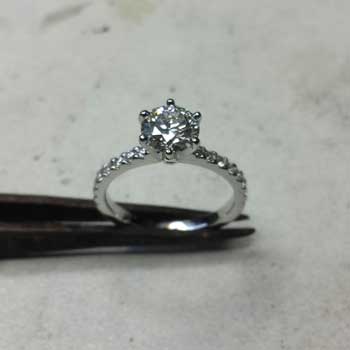 The finished ring was rather magnificent.  James had no complaints, indeed; we needed to tweak the size slightly (as it was a fraction too big) and he had to coax his fiancée to come in to see us – she didn’t relax until the ring was back on her finger!

How long does it take to make a platinum engagement ring like this?

The longest wait was for James to decide what he wanted for his engagement ring.  Once we had clarity on the design, the ring took two weeks to make.  Handmade is often quicker than made to order, the two caveats to this being that there will be a seasonal affect, trying this the second week of December you’re looking at a longer wait!  In addition, there is a premium for a bespoke design and it depends on the complexity of the piece.  In this case the outlay wasn’t too significant, as my workshop knew exactly what was required, and executed it beautifully!

Have a look at our different service levels for your engagement ring.

Our easy to understand guide covering all of the essentials that you need to understand to make the right decisions when buying an engagement ring.

Is remodelling right for you?

We’ve collated the key points that will help you decide if your jewellery will benefit from up-cycling and remodelling.

Back to all advice
Definitions : Made to Order, Designer or Bespoke Jewellery
Different jewellery descriptions usually means different prices. But why? We look at the three main descriptors of our jewellery and engagement rings and explain the terms.
Read more
All About Diamonds and the GIA 4 C's
The GIA (Gemmological Institute of America) created the first, and now globally accepted standard for describing diamonds: Cut, Colour, Clarity, and Carat Weight.
Read more
The Wedding Ring Guide
Heirloom Wedding Ring Guide, a simple guide to wedding rings to help those planning their wedding to understand the key terminology used to describe them.
Read more
Engagement Rings
Diamonds
Remodelling
Rings for Arthritis
Jewellery
Consultancy

If you are looking for something not covered by our services just get in touch. We’ll be able to answer your question right away and our first conversation won't cost you anything.